Warning: "continue" targeting switch is equivalent to "break". Did you mean to use "continue 2"? in /homepages/12/d621967133/htdocs/clickandbuilds/Nerdhub/wp-content/plugins/jetpack/_inc/lib/class.media-summary.php on line 87
 Nerdhub | Injustice 2 Joker Reveal: Not Everyone’s Cup of Tea
NerdHub

Recently Injustice 2 revealed that The Joker would be a playable character, and before I get into my reaction I suggest you watch the YouTube clip below.

Before I start on the negatives I just want to take a moment and appreciate the game play in Injustice 2, they’ve really adapted the Mortal Kombat formula to fit in with DC Comics, the mannerisms of each character is evident in their fighting style meaning that no matter what character you chose to fight as each fight is unique.

Fans of Gods Among Us will know that Superman killed The Joker after he tricked him into killing Lois Lane who was pregnant with his son….and blowing up Metropolis so you know, karma got him good. My problem isn’t that they included The Joker in the game after killing him off, Batman Arkham Knight did that and I love that game, I’m actually glad he’s included because he’s is one of the most popular DC has ever created, the only problem I have is something I’m sure is shared with a lot of people out there. The character of The Joker has always undergone changes in terms of appearance and it has always been tolerable when big reveals are made. Even, Leto’s Joker in Suicide Squad sort of became ok, eventually. When it comes to the comics and movies there is an actor/story to give the new appearance a chance and to come to terms with it.

The same could be said with video-games, however, the Injustice games are fighting games which means stories and build ups are shortened, which in turn, means less time to connect with a newly changed character.

Why has his looked changed so much? I’m the first to admit that I don’t like change and this is no exception, I don’t like it. It makes sense that they would try and make him resemble how he currently looks in the recent comics but Injustice 2 has decided to go a different way and make him the way they want him to be. In my opinion, he gives the vibe of an angry, emo teenager who has decided to dress up as the Joker as his every day wear, rather than a conniving criminal mastermind 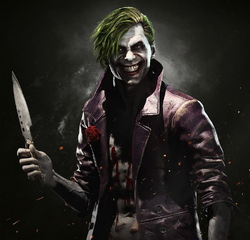 While he still has some key elements of The Joker (Purple Jacket, White skin, Green hair and creepy smile) the way he’s being presented makes him seem like a teen and that’s not the image I want when I think of The Joker.

Let me know your thoughts in the comments below.